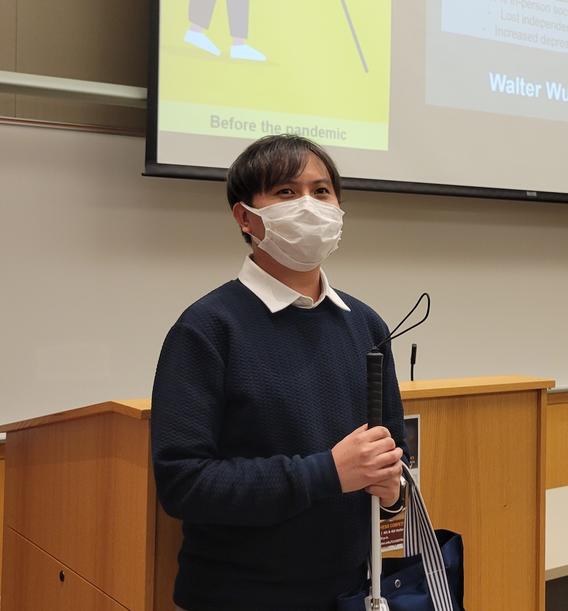 Interview with Walter Wu Regarding his 3MT Competition

This fall Walter Wu, a psychology graduate student  and member of CATSS, competed in the 3 Minute Thesis (3MT) Competition, a competition in which graduate students are given just 3 minutes and one slide to present their thesis work. He won both the Psychology Department and CLA competitions in October, presenting his research project entitled "Pandemic, Visual Impairment, and Social Isolation." On November 12th Walter competed in the University-wide 3MT competition and took home both second place and the People's Choice winner, the winner chosen by the popular vote of all those attending. We interviewed Walter to ask him about his experiences.

Q. What did you enjoy most about competing in the 3 Minute Thesis Competition?
There were two things I enjoyed the most about the 3MT. The first thing was being able to share our work done by our teams at CATSS with others. Our team believes that the project addresses a very important question: the unique challenges faced by older people with sensory loss. My goal is to share our findings with as many people as I can and raise the consciousness of the public concerning the impact of the pandemic on older adults with sensory loss. The second thing I enjoyed the most was to learn from other fellow grad students at the U and around the world about their research. During the preparation process, I watched many recordings of past 3MT competitions held at the U and other Universities around the world. I really enjoyed listening to other fascinating research presented in an accessible way. One of my favorite 3MT presentations is this: https://youtu.be/AD1hGELyg_k?t=2059.

Q. What inspired you to participate in the 3 Minute Thesis Competition?
For a long time, people with disabilities have been invisible in society, especially during the pandemic. My motivation to join the 3MT competition was to use three minutes to make those invisible people visible by presenting our research. Although I did not make it to the next level, I tried my best to make our research heard. I was also inspired by Caitlin Sisk, another grad student from the Psych department, and the NRT training program. I watched her 3MT presentation a few years ago and found it really fascinating. I wished I could be a good presenter like her so I chose to join the 3MT competition this year.

Q. What was your least favorite part of the competition?
I would say the online format of the competition was less enjoyable. When presenting over Zoom, it's hard to know the audience's reaction and I did not have a chance to talk to other presenters.

Q. How did you prepare for the competition?
I started by watching many past 3MT presentations. When I watched others' presentations, I tried to analyze the structure of their presentations, like how much time they spent on the introduction, methods, and results. After that, I tried to pick one of my thesis projects for my presentation because I knew that I could not present all my thesis projects in 3 minutes. I then started writing my scripts. I also tried to limit the length of my script to less than 400 words. After writing a few versions of scripts, I tried to make recordings of my presentations and sent one recording to my advisor and lab members for their comments and feedback. Before my first presentation at the psych department, I revised my script again and again. I also knew I could easily get nervous while I was presenting, so I tried to make sure that I memorized the script thoroughly. In the past two months, I repeated the script to myself whenever I was free. I also listened to an audio recording of my script transcribed from the text before sleep or during my commute to school.

Q. What would you say is the most important take-home message from the study that you completed?
I would say that the impact of sensory loss, either hearing loss or vision impairment, was not limited to only the tasks that require our sensory perception. Our mental health, social interactions, and quality of life could also be affected after sensory loss.

Q. What did you learn about communicating with general audiences, as opposed to other sensory scientists?
Instead of presenting the nitty-gritty details of a study, the general audience may favor stories more. It's more effective to have a story that can prepare your general audience for understanding your research. I also tried to avoid using technical jargon in my presentations. To achieve this, I asked my friends outside of our field to comment on my presentation.

Watch a recording of Walter's presentation on the UMN Graduate School Youtube channel.