Using AR to Understand the Adaptability of the Brain 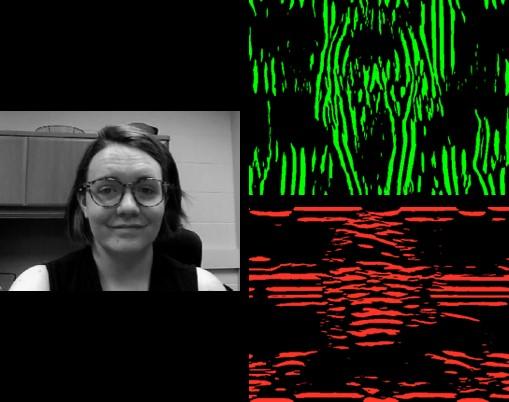 The human visual system is constantly adjusting to new environments. For example, as nights get longer, we’re spending less time in the bright sunlight, and more time indoors under dim lighting conditions. As the pandemic continues, we’re also spending more and more time looking at harsh displays for work and socialization. This is why it’s so important to understand how the visual system is able to adapt. One way that we are exploring this topic is by investigating a famous illusion known as the McCollough Effect. This illusion is a result of exposing participants to brightly colored lines for several minutes. Afterward, black and white lines appear to have a tint, and importantly this effect can last weeks or even months. An early example of this effect was found in computer programmers who spent long stretches of their days looking at green text on a black background. These people found later on that their children’s homework on lined paper appeared to have a reddish tint. We believe this is because of specialized neurons in the visual cortex that relate to perceiving color and edge orientation, but little work has been done to more fully understand this compelling effect.

In order to find out more about how and why the McCollough Effect exists, we developed a new paradigm to induce an especially powerful version of the effect using AR goggles. Participants were asked to wear AR goggles that filtered the environment to appear in brightly colored tiger stripe-like patterns. They then adapted in this “McCollough World” for 2 hours, performing intermittent tests to see how powerful their effect had gotten. We found that we were able to induce really powerful effects using this method, which allowed us to extend this work into the domain of fMRI.

fMRI is a tool we can use to look at where in the brain certain activities are occurring. For this study, we wanted to know where in the brain stripes that should look black and white, now appear to have color. Using this method, we were able to find evidence that areas associated with the very early levels of visual processing are showing this effect. This finding is broadly important to neuroscience because brain plasticity (or changeability) is an essential treatment for many categories of disorder, including traumatic brain injury and amblyopia. With these results, we now have evidence that long-term adjustments in the adult visual system do occur, and that we can now work to utilize this type of paradigm to help individuals with a number of conditions.